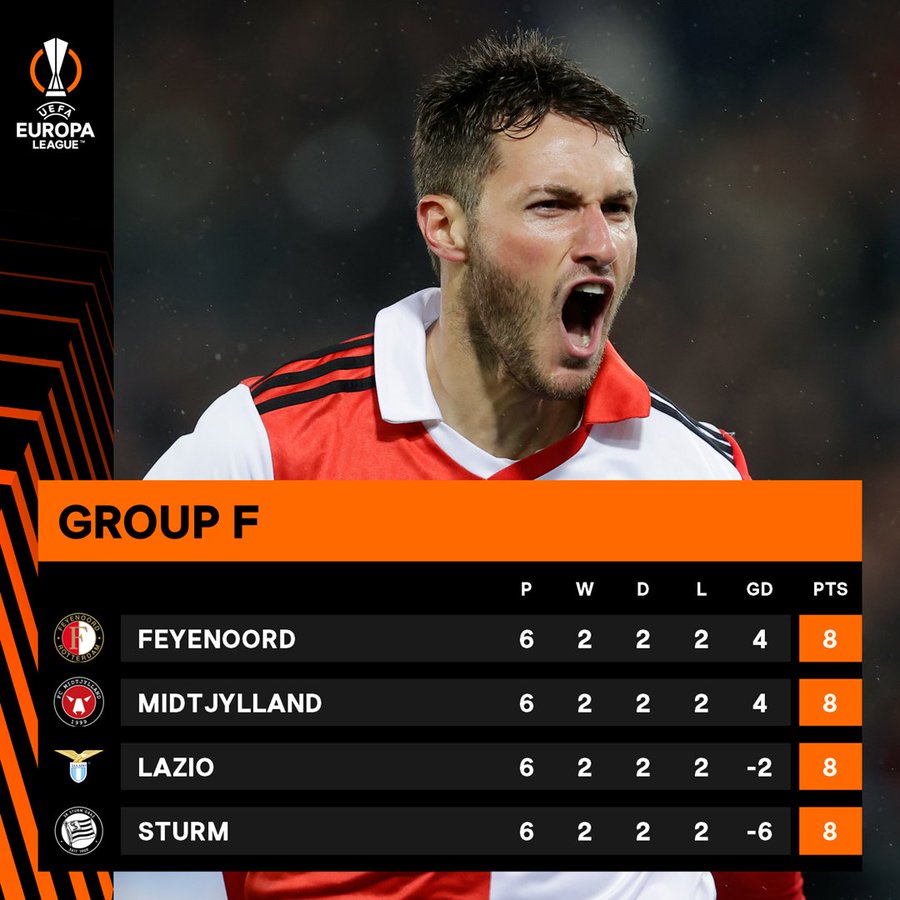 Full-balance groups in major tournamentsOne of the groups (F) of Europa League saw all four clubs (Feyenoord, Midtjylland, Lazio, Sturm Graz) finishing with same number of points (8). The places in the final table were decided by the tie-breaking criteria: goal difference. Also number of wins, draws and losses (each time 2) was identical for all members of quartet.This is the first “full-balance” 4-team group in the whole history of major European club competitions (since the group system has been introduced), but not in the world.The history of Copa Libertadores knows several such cases. *The first of them happened in the edition of 1969, in the group 2 with participants from Chile (Wanderers Valparaíso, Universidad Católica) and Peru (Sporting Cristal, Juan Aurich). All four finished with 6 points (under old 2-1-0 points system).According to the rules then in force, goal difference or any other indicators were not used for determining places. They all four had to hold an additional mini-tournament with each of them playing one match at home and one away. In this mini-tournament, the first two places were gained by Chilean teams, Universidad Católica and Wanderers. They have moved on to the next stage.*At the next similar case, in 1980 edition, the rule of goal difference using as a tie-breaker has already been put into effect. There was only one ticket to the next stage at that time. Thanks to this indicator, O'Higgins (Chile) got it while the other three contenders which also earned 6 points (Colo Colo from Chile, Cerro Porteño and Sol de América) were left with nothing.*In 1990 Copa Libertadores, all four teams from the Ecuadorian-Bolivian group finished with 6 points. They competed for 3 placed in the playoff stage. Emelec Guayaquil and The Strongest La Paz as two teams with a positive goal difference (+1) were awarded two highest places. Other two, Barcelona Guayaquil and Oriente Petrolero Santa Cruz, with fully identical numbers (2 wins, 2 draws, 2 losses, 6 scored and 7 conceded goals), had to play 2 extra games. Barcelona won the first of them 3-1 and lost 2-3 the second. Strangely, goal difference was not taken in consideration at this rivalry. Instead, the shootouts were appointed. Barcelona won this procedure and third ticket into playoffs.*Another two quartets from 2007 and 2013 also can be mentioned. In each of these two cases, all teams also finished with an even balance of wins and losses. But two of them had 3 and 3 (this is indicated in the table below), and the other 2 and 2 (with 2 draws). Since the new rule was in effect (3 points for a win), the first two with 9 points got advantage over the other two (8) and hence advanced to the playoffs just on points.*Finally, there was also unique full-balance group from World Cup history, in 1994 edition, with all four teams finishing with 1 win, 1 draw and 1 loss (4 points) and zero goal difference. The next criteria, number of goals, put Mexico (3) on the highest place and Norway (1) on the lowest. Republic of Ireland got 2nd and Italy 3rd due to head-to head game (1-0 for Ireland). However, this didn’t impede Italy, also qualified for playoffs, to reach then the final.