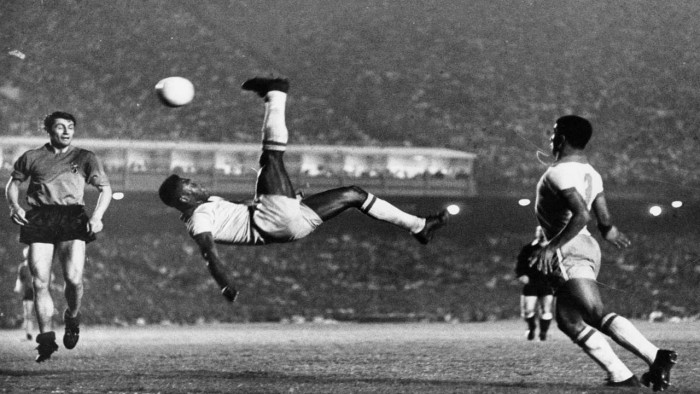 IFFHS NEWS AND STATISTICS OF THE WEEK 51

Picture : Pele was crowned by IFFHS as THE WORLD'S BEST FOOTBALL PLAYER OF THE XXth CENTURY (1901-2000).

THE FIRST TO WEAR MASK !

The 2020 Concacaf Champions League resumed last week with leg two of Olimpia versus Montreal — 280 days after the Honduran side had disappointed 23,000 fans inside the Impact’s Olympic Stadium by snatching a crucial 2-1 road win.

One of the sights of the match was Olimpia captain Jerry Bengtson — already a legend of the Concacaf region — wearing a mask for the entirety of his 76 minutes on the pitch.  Bengtson , 33 years old, is now the first player to wear a face mask during a professional football match. The only person to come close to matching that record is the18’s very own David Moore, who wore a mask during amateur hour.

Al Ahly’s President Captain Mahmoud El Khatib became last month the first in Africa to win the CAF Champions League as a Player and as a President !

The Red Eagles clinched the ninth African title in the Club’s History after defeating Zamalek in the Caf Champions League Final. El Khatib won the title as a Player in 1982 and 1987, and in 2020 he guided the club to win the title as a President to set an impressive Record.

Known by the nickname ‘Bibo’, El Khatib was an icon of Egyptian football in the 1970s and ‘80s. The striker was honoured as African Footballer of the Year in 1983 and was also named as the Arab Sportsman of the 20th century. He was recognised by IFFHS as the joint 11th-best African player of the last century and by CAF in 2007 as the second greatest. On the international front, he won the 1986 Africa Cup of Nations with Egypt and represented the country at the Olympics two years prior, while his club career saw major success with Cairo giants Al Ahly.

-      François Letexier, the future of French Refereeing, made his UEFA Champions League debut last week at just 31 years, 7 months and 16 days of age, becoming the 3rd youngest Official EVER to referee a game in the Top European Competition.

-      Inaki Williams, the striker of Athletic Club Bilbao, has played all matches with his club in the Spanish LA LIGA since five years, 171 consecutive games ! We must remember April 2016 to see Bilbao without Williams on the field !

-   English referee Rebecca Welsh has been promoted to UEFA Elite. She is the only female Referee promoted to the highest level of European Refereeing