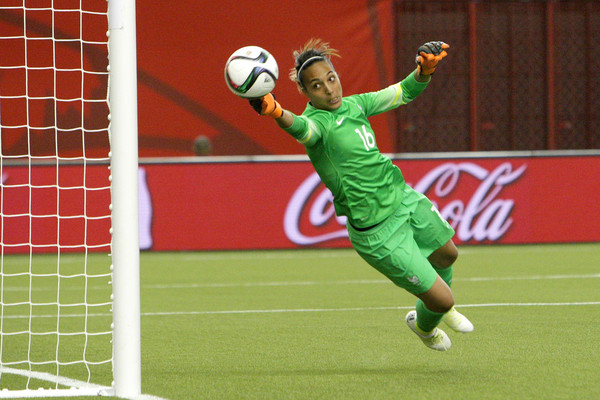 Since the beginning of the IFFHS Women’s Awards on 2012, the brillant US Goalkeeper Hope Solo has won each year the Award of The World’s Best Woman Goalkeeper (2012, 2013, 2014 with Schulth, 2015).
For the first time, Hope Solo must give away her crown to the French Goalkeeper from the National team and from Olympique Lyon, Sarah Bouhaddi. Editorial staff and Football experts from 56 countries all over the world have voted with a confortable advance Sarah Bouhaddi as the N°1 in 2016. She won the Award with 29 points more than Almuth Schulth, the German Goalkeeper from Wolfsburg (winner with Hope Solo on 2014) and 34 points more than Hope Solo, the US legend Goalkeeper.

Sarah Bouhaddi (30 years old), who plays in Lyon since 2009, has won 7 French Championship titles , 5 French Cup and 3 UEFA Champions League, the last was the success against Wolfsburg in may 2016 ! She is also the Goalkeeper of the National team of France (115 selections) and her Award is more than deserved. Bouhaddi has a sound technique but adds to these qualities with a quickness of vision and distance.