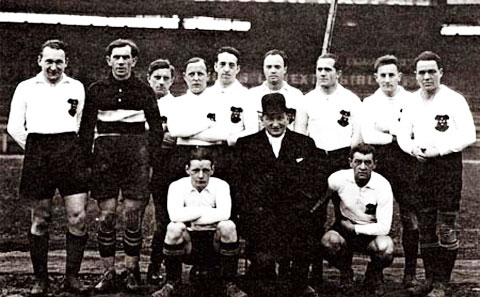 THE BEGINNING OF THE COMPETITION 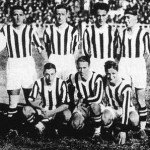 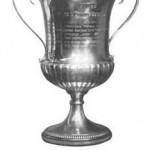 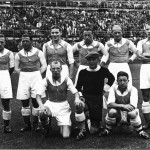 Picture : Hugo Meisl, the man with the hat in the middle of Austria team

As a consequence of World War I  national borders were adjusted and the newly-formed states of Austria, Hungary, Yugoslavia and Czechoslovakia were created in the so called Donau-area. People in these areas strived for independence and international recognition. Football was thought to be a suitable way of achieving that. The first years after the war were barely over, and the worst misery dealt with, before this European region began an economic upturn and professional football was introduced and legalized in Austria, Hungary and Czechoslovakia in the middle of the 1920s. The introduction of professional football lead to a considerable increase in the performance of these nations.

This was seen not only at national level, but also internationally in the shape of the respective national teams. At first only friendlies in Europe were played, however the Olympic tournament, particularly from 1912 onwards offered a competition for all countries; while the Britons since 1884 had their annual “British Championship” [Home internationals, just as as the South Americans their South American championship (Copa América) from 1916]. The brilliant performances at the Olympic tournaments in 1924 and 1928, as well as the narrow-minded attitudes of the International Olympic Committee (IOC), led to increased efforts by FIFA to organize a World Cup. On the level of the national teams there were signs of a new draft for future tournaments and the ideas were soon taken up (“adopted”) by other continents and part of continents.

At club level, at that time, international contacts were limited to friendly matches, weekend-tournaments and tours of foreign countries. But with the introduction of professional football on the European continent, club football achieved a greater importance, especially as the clubs now had to pay the players. The Austrian Hugo Meisl had been one of the leading and most influential personalities in Austrian football and also in FIFA, as well as an association football captain and referee. He had the inspired idea of an international club competition. This idea was quickly recognised as ground-breaking and one of the best innovations of all time in international football.

The  fundamental idea of  the Austrian pioneer was that the national league championship should serve as the qualification for participation in this international competition. It would also increase  the value of the national championships. The competition would be played on the knock-out system with first and second legs, and determined by aggregate. The final would also be played on a home and away basis. So simple was this “Columbus Egg”! The Mitropa Cup’s birth date was March 31th 1927, when it was founded in a Vienna office by the leading proponents Hugo Meisl and the Hungarian Dr. Ing. Fischer.

As well as the best teams from Hungary, Austria and Czechoslovakia, Hugo Meisl wanted the top German clubs to compete, but at that time there was no national league in Germany and the final rounds of the German championship and the start of the Mitropa Cup took place at almost the same time. The German FA (DFB) also argued that it the competition required the participation of professional teams – but the reality was probably that not one of the leading lights in the DFB was able, professionally or intellectually, to see and recognize the consequences of such a Central European club championship.

Yugoslavian clubs were allowed to participate in 1927 because the Italians did not have a national league and its clubs had yet to acquire a reputation as the »Squadra Azzurra«. In the first years it was difficult for the Austrian champions and runners-up to take part in the Mitropa Cup because of their long-term tour obligations of foreign countries. Instead the cupwinners or the team in 3rd or 4th place in the national championship took part. As a result of the weak performances of theYugoslavian clubs and the foundation of the Italian Serie A the Yugoslavian teams were replaced by the Italian clubs from 1929. The increasing number of South Americans with the Italian clubs led to a considerable improvement in their standard of play and made them an attraction in the other participating countries.

The occasional disorder and brawls in some of the matches couldn’t stop the inevitable “triumphal progress” of the Mitropa Cup. The attendances and income generated surpassed all expectations; and the Mitropa Committee made some very wise and far-sighted decisions. And giving the Mitropa Cup its name, this led to a sponsorship so that every time the clubs had to play away games, the journeys in Europe were always made by rail and always in the Mitropa-carriages.

In 1934 it was decided that the four strongest nations – Italy, Austria, Hungary and Czechoslovakia – should take part with each providing the four best placed teams from the national leagues. Consequently, the competition began with the 1/8-finals, and two teams from the same nation were prevented from playing against each other – so far as was possible. The appeal of the Mitropa Cup gripped the fans, the players and the administrators. Other countries sought the participation of their clubs, excepted the thick-skinnned Germans. Even clubs from Romania and Bulgaria wanted to join in.

The Mitropa-committee was, however, very careful with regard to enlarging the competition. Above all it was important to avoid a watering-down of  tournament’s prestige or perhaps the public attraction of the early rounds. The Italians and the Czechoslovakians were in favour of an enlargement of the clubs in Mitropa Cup (also for those from Romania and Yugoslavia). But this was refused by Austria and Hungary until 1936. Finally, a compromise was reached, involving what was remiscent of an entrance examination (“test”).

The result was that in 1936 the four best clubs in the Swiss league each played in a qualification round against one of the teams who had finished in 4th place in the national championships of Italy, Austria, Hungary and Czechoslovakia respectively. At the same time it was decided that 40% of the income from each match (minimum 3000 Swiss Francs) should go to the visiting team. It was agreed to have a fixed day for the fixtures for each round, grass pitches and wire netting fences for the spectators were an addional condition. As for the Swiss clubs, all four clubs from the Switzerland were eliminated and failed to qualify.

The huge sporting and financial development of the Mitropa Cup could no longer be stopped. The Mitropa Cup was subscribed to as “The Golden Calf” long ago. The competition survived the world economic crisis and was for some clubs a life-saving lifeline to success. The dissatisfication about referee performances, nationalistic and emotions outlooks as well as poor discipline by the players were addressed by skilful handling with a positive outcome. The Mitropa Cup’s grip on the fans and the media is reflected in the simplicity of this knock-out competition, and not forgetting the world-class players who apperared for the participating teams.

From 1937, clubs from seven nations participated in the Mitropa Cup: Italy, Austria, Hungary and Czechoslovakia with 3 clubs each; Switzerland with two clubs and Yugoslavia and Romania represented by their champion club. At this time a lot was done to try to get clubs from Spain involved. Hugo Meisl was convinced that the clubs of the territorially connected countries (above all France) would quickly join. In his view, there was already a European club championship being achieved step by step.

Unfortunately all plans and ideas suffered at that time from drastic political changes and everyone had to restrict their activities. In Genoa 1937 a ban on playing was introduced and the Austrian-Italian tension began to be more apparent. The Swiss clubs did not participate in the Mitropa Cup 1938. The Spanish Civil War made it impossible for clubs from Spain to participate in the Mitropa Cup.

The German invasion and annexation of Austrian territory into the „Deutsche Reich“ prevented the Austrian clubs from participatiing in the Mitropa Cup in 1938. The organizing committee reacted by giving the “big nations” (Hungary, Czechoslovakia and Italy) four places instead of three and then accepting two from Romania and Yugoslavia, thus making it possible to start the 1938 Mitropa Cup with the 1/8-finals.

The developing political situation and the increasing prospect of war meant that in 1939 only 50% of the qualifying clubs were invited to play in Mitropa Cup. Because of the reduced number of clubs, the competition started with the quarter-finals. In 1940 the Mitropa Cup again had only 8 teams participating and the competition wasn’t played to the end, coming to a halt before the finals.

So World War II brought the Mitropa Cup to a halt. There is no doubt that the Mitropa Cup – and the genius of Hugo Meisl – are the parent of the European Champions Cup. In the 1950s, the French succeeded in resurrecting this original and clever idea.