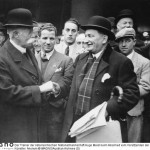 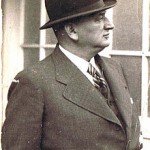 When Hugo Meisl was six years old, he moved to Vienna together with family. He had two brothers, Leopold (who was a big name in Austrian swimming) and Willy (born 26.12.1895) who became the goalkeeper of the national teams in both football and water polo. After retirement from sport, Willy became a well known sportswriter. In football Hugo impoved rapidly with the Vienna “Cricketers” and became a very fast wing and also a very good dribbler. Having copmleted his education at the Vienna Commercial Academy he went for 2½ years to Paris (France) and Trieste (Italy).

In 1905 he obtained a referees licence and it quickly became obvious that he was a splendid referee and his progress was meteoric. He had complete knowledge of the laws of the game and a very good understanding of human nature. In parallel to his refereeing career he was one of the leading personalities of the Austrian referees association. At the same time he was a member of the board of ÖFB (the Austrian Football Association), and began as “Reiseleiter” (courier) of the national teams. But soon he became association captain and enjoyed a very important and influential role in the selection of the national team, also during the period when “Jimmy” Hogan (England) prepared the team for the Olympic football tournament in Stockholm in 1912.

Following the Olympic tournament he was given sole responsibility for the national team, and he was also, from time to time, head of the football department, and coach of the Wiener Amateur-Sportverein (WAS), founded on March 15th, 1911. This was the club where his brother Willy was one of the players (goalkeeper). In World War I Hugo Meisl was stationed mostly in Serbia as a first lieutenant (October 1914 to September 1918) and at the end of the war he again took over the function of the “Verbandskapitän” (manager of the national team), who had meanwhile (during the war) had Heinrich Retschury as boss.

Football played according to the “Vienna School of Football” was typically based on the ground, i.e., moving the ball around quickly along the ground with play focussed in “small” triangles instead of lofted balls hit up towards the centre-forward. The Czechs preferred their own “mala Uliča”, which was a direct attacking play with short passings, while the Hungarians preferred their “tempo magyarok” – a quick attacking play very much using the wings. Hugo Meisl was loooking for a type of play that could combine all those splendid qualities, and he tried everything to achieve this goal. In his thinking Hugo Meisl often was a revolutionary, combining his enormous football knowledge with logical conclusions which enabled him to achieve his aim.

He was already in 1904 talking of a world championship for football’s national teams but his ideas were scorned. Even before World War I, Hugo Meisl had told the general secretary of FIFA, the Dutchman Carl Anton Willem Hirschmann, about his ideas. Later he was the great promotor of the start of professional football in Austria, Hungary and Czechoslovakia in order to raise the level of performance. As an advocate of professional football Hugo Meisl crusaded against the hypocrites from Italy, Hungary, Germany and the Czechoslovakia. His genius was confirmed by the creation of the Mitropa Cup.

He was much travelled with the Austrian national team; he and his team travelled a distance of about 116,000 kilometres by train. He also coached the Austrian B-team as well as the city of Vienna select eleven. And in what no one would had expected in advance, he worked for football for more than a quarter of a century without payment. In 1929 he was forced out for a few months because of an operation, but he returned using the walking stick which he had to adopt immediately after his operation. From that day onwards the stick became his most obvious trade mark.

Hugo Meisl, of course, had his enemies and sharp critics, but their voices were quickly silenced when it was known that the Austrian clubs between August 1st 1931 and July 31st 1932 had played no less than 338 matches against foreign opponents. Of those matches, 309 had been played away (outside Austria) and the total statistics for the 338 matches were: 234 won, 37 drawn and only 67 defeats. Hugo Meisl was a regular customer of the local “Wiener Ringcafé” situated in Ringgasse 9 in Vienna. Here he enjoyed discussing football both with experts and his critics. Privately he was an amusing person and a brilliant and witty speaker. He was a clever, competent and skilled negotiator and through his international outlook, ideas and opinions, as well as his brillant language skills, he was popular and widely respected.

Hugo Meisl, who was married and had three children, was among the instigators of the “Nations Cup”. The Czech prime minister Svehla donated a cup which bore his name. This competition featured the national teams from the Czechoslovakia, Hungary, Austria, Italy and Switzerland; the matches were played during a period of three years starting with the years 1927-29.

In the 3rd decade of the 20th century the Austrian football had become much stronger, especially after professional football had been introduced, and Hugo Meisl now tested different types of players in his national team in order to find the best possible team. He created a team that was called “Wiener Wunderteam” (Vienna Wonderteam), the first such in the history of the world football. The team was attack minded, technically brilliant and full of ideas. The team “was born” on May 16th, 1931, when they won against Scotland 5-0. Shortly afterwards the team won 6-0 against Germany, handing out a lesson in the process. There followed some superb wins against other countries. It was fewer the unbeaten serie, but as did play this Austrian national team.

Before the World Cup in 1934 Austria was among the favourites, but because of his work for FIFA Hugo Meisl didn’t have enough time to spend with his team to ensure it was properly prepared for the competition. In the 1/8-final match Austria missed many chances and had to go into extra time before victory was achieved. In the quarter-final against arch rivals from Hungary everything went well but in the semi-final Austria had to play the hosts from Italy and lost 0-1. The Swedish referee Ivan Eklind was a great admirer of “Il Duce” (the Italian leader Mussolini), so the Austrians were not, in any sense, afforded fairplay by Eklind. And the decisive goal was scored by Enrique Guanita, who was Argentinian and therefore not eligible to play for Italy. Of course Hugo Meisl was aware that both Guanita and his Argentinian team mate Luis Felipe Monti were not eligible to play for Italy and protested vehemently. But Hugo Meisl could not succeed against the fascistic organization and a FIFA World Cup Committee made up of a majority of Italians and Germans.

An interesting fact is that Hugo Meisl developed a close friendship with both the Italian national coach Vittorio Pozzo (an industry-man / wood industry) and the Englishman Herbert Chapman (an engineer), who was the manager for Arsenal FC from London. Chapman was well-known worldwide and created the system using the position of centre full-back. Hugo Meisl died suddenly on February 17th, 1937, at 11.30 o’clock, from a heart attack while in the middle of his daily work at the “ÖFB-Haus” (the offices of the Austrian football association that opened in 1933). Four days later he was buried in the “Zentral-Friedhof” (central cemetery) in Vienna.

13 months later and such a funeral would no longer have been possible because of the invasion by Hitler’s troops. Hugo Meisl’s opponents were from the national-socialist party, and “the Third Reich” (Germany) that had led a long and malicious campaign against him. The two leading people from “Kicker” (German football magazine) Müllenbach and Becker from Nuremberg even published a book about Austrian football history (Das Wunderteam – 48 pages) and in that book they did NOT at any time mention the name of Hugo Meisl! Even in the reprint (1991) Meisl wasn’t mentioned. The German sport print media are still always a master of the hushing up.

The well-known German football writer Ernst Werner in a nationalistic and deliberate fashion purposely falsified the way he reported about Hugo Meisl and the 1928 FIFA-Congress in Amsterdam. Among other comments, he wrote the following: “In the plenum is Hugo Meisl, a Jew from Vienna, who is with the natural flexibility of his race, and with the subversive morale of the Jews, one of the greatest card mixer. He and the German football leader Linnemann – to home an esteemed criminologist – are the two of the biggest conceivable contrasts. The one a representative of the extreme business methods of football, the other an apostle of amateurism. In reality professional football in Vienna has condemned amateur football to the death and nobody cares about it!”. This contribution was published in 1928 – five years before the seizure of power by the fascists, and the Austrians amateurs won the 1936 Olympic silver medals with hosts Germany being eliminated early.