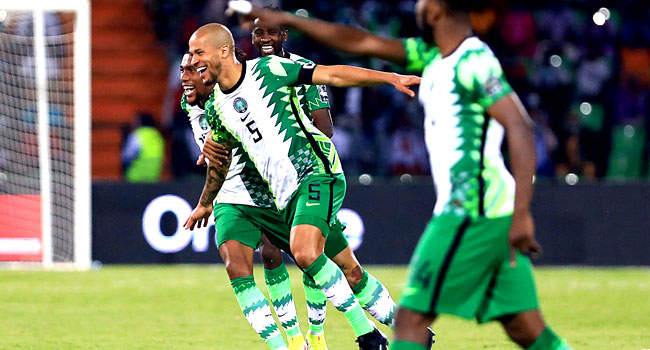 Nigeria make history winning all round 1 games at AFCON finals.

The Super Eagles of Nigeria made history by winning all their matches in the first round of the Africa Cup of Nations Finals. After winning their first two games, it was certain that manager, Augustine Eguavon was eyeing an achievement no technician before him at the helm of the squad had attained. At the Roumdé Adjia Stadium in Garoua last night, they battled Guinea Bissau with utmost seriousness, beating them 2-0 to score the best first round performance of 9/9 points. After a 0-0 first half during which both sides gave the huge turnout their gate fee worth, unmarked Umar Sadiq connected a pass from the flanks to beat the keeper for 1-0 on 56 minutes. It was a piece of sheer football aesthetics in the 75th minute when Simon Moses dumbfounded three markers with a brilliant wriggle in the area and finding the crossbar for captain William Troost- Ekong to put Nigeria up, 2-0. The man who was scoring his first goal ever, celebrated after VAR confirmed, and equally went on to be voted the most valuable player of the game.

It was certainly long in coming but the pre-tournament predictions of group C finally held sway. If Nigeria made it certain as early as the second day of play, Egypt had to play to the wire to occupy the second slot. Playing at the Ahmadou Ahidjo Stadium, Mfandena, marksman, Mohamed Salah was denied the opportunity to celebrate his very goal for the second time in the tournament. Sudan with one goal in their accounts before the match and hoping to make capital of a possible victory and thus possibly eligible as one of four best third teams demonstrated absolute resilience. Their first choice keeper, Mohamed Mustapha was a delight at goal until fouled and rendered less performing by Mostapha Abdalla at the 33rd minute. That made  way for defender, Mohamed Abdelmoneim to finally get the priceless goal for Egypt when he headed the ball into the net in the 42nd minute. Substitute Sudanese keeper, Ali Abdallah brought in at the start of the second half was great on duty, preventing the spirited Egyptian attack from increasing tally. His opposite number, Mohamed El Shenawy of Egypt equally denied the Sudanese an equalizer at the 80th minute, maintaining the scores at 1-0. Egypt’s Ahmed Hegazy was voted the most valuable player. At the end of the first round, group D stands thus: Nigeria 9 pts, Egypt 6 pts, Sudan 1 pt and Guinea Bissau 1 pt.

For now, the only certain fixtures for the round of 16 are Burkina Faso vs Gabon scheduled for Sunday, 23 January in Limbe, and Senegal vs Cape Verde  on Tuesday, 25 January in Kouekong..