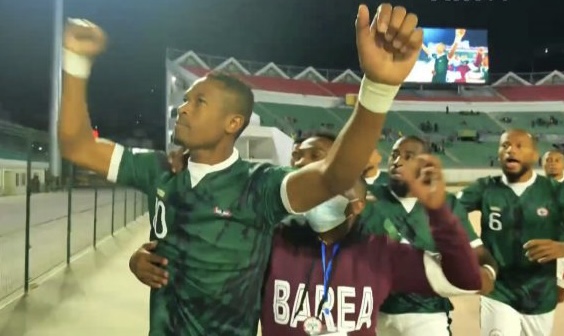 The wide berth taken by Tunisia in Group B thinned down following their 0-0 tie with Mauritania at the Stade Olympique, Nouakchott today. The other two teams in the same group, Zambia and Equatorial Guinea played to a 1-1 draw at the National Heroes Stadium, Lusaka. Zambia forward, Fashion Sakala collected the ball at the edge of the box, laid his marker to rest before rifling past the keeper on 55 minutes. Equatorial Guinea midfielder, Federico Bikoro equalized on 82 minutes when he headed in the ball from a corner kick. At the end of the two match days, the group has Tunisia on 10pts, Equatorial Guinea 7pts, Zambia 4pts and Mauritania 1pt.

Nigeria prevented a second consecutive match day celebration for the Central African Republic, defeating them 2-0 at the Japoma Stadium in Cameroon. After several attempts on goal, the visitors got the first goal on 29 minutes when  defender, Leon Balogun latched on to a distant lob to beat the keeper. Forward player, Victor Osimhen capitalized on shaky defending to find the back of the net one minute into stoppage time of the first half. In the other Group C game played at the characteristically windy Stadium Aderito Sena, the hosts, Cape Verde edged Liberia,1-0 courtesy of a 90th minute goal by forward player, Ryan Mendes. Nigeria tally 9pts on top of Group C, Cape Verde 7pts, Central African Republic 4pts and Liberia 1pt.

In Group E, Uganda made it a back-to-back victory over Rwanda when forward player, Fahad Bayo made it 1-0 on 22 minutes, igniting wild celebrations at the St. Mary's Stadium, Kampala. In the other group game played at the Nyayo National Stadium, visiting Mali prevailed  1-0 over Kenya following a perfect connecting strike by forward,  Ibrahima Kone on 55 minutes. Mali now sit on top of Group E with 10 points, Uganda 8pts, Kenya 2pts and Rwanda 1pt.