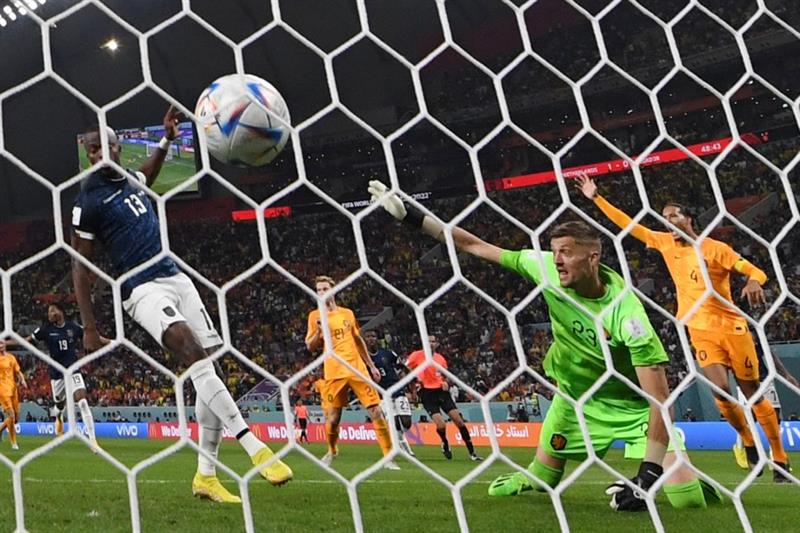 Picture : Enner Valencia (Ecuador) prolonged his streak as the scorer of 6 consecutive goals of his team in the World Cups. He equaled the competition record shared by Eusébio, Paolo Rossi, Oleg Salenko and has a chance to set the new record.

The statistics on 2022 World Cup day 6 (25 November)*For the first time, Iran has beaten a European team (Wales 2-0) in a World Cup match. They had 9 such games before (2 draws, 7 losses). *For the first time, Wales have lost a World Cup group stage game (tied all 3 at the their only edition before, in 1958) and conceded more than once in any World Cup game (avoided this in all 6 games before).*Wayne Hennessey (Wales) became the third goalkeeper to receive a red card at the World Cup, after Gianluca Pagliuca (Italy, vs Norway in 1994) and Itumeleng Khune (South Africa, vs Uruguay in 2010). *Iran are the 3rd team to score two goals in the added time in the history of the World Cup after coming level at minute 90. Both precedents happened in 2018, with the same final score 2-0 (Brazil vs Costa Rica and South Korea vs Germany).*Roozbeh Cheshmi's goal against Wales became the latest (97’56’’) match-winning ever scored in a World Cup game (not counting extra-times).*All 4 latest goals in the World Cup history (not counting extra-times) have been scored in the current edition, two of them in the same game Iran vs Wales (also Ramin Rezaeian at 100'39''), three of them by the same team (Iran, also Mehdi Taremi, 102'30'' vs England).The remaining was scored by Davy Klaassen (Netherlands), at 98'18'' vs Senegal.*This edition of World Cup made to wait the longest to see the first goal from outside the area. This goal scored by the Iranian Rouzbeh Cheshmi was chronologically the 42nd of the tournament.The previous record was from 1978 edition where the first goal from outside was 20th (scored on 3 June by Teofilo Cubillas, Peru, vs Scotland; in the same game he scored 6 minutes later another goal from free kick which became 2nd from outside the area in that tournament).*Qatar (1-3 vs Senegal) is the host country that took the longest to score their first goal in the World Cup history (168 minutes), ahead of Mexico in 1970 (135 minutes) and England in 1966 (127).*Qatar became the 1st team eliminated from this World Cup, and 1st host nation in the World Cup history to lose their first 2 matches and 2nd host nation in the World Cup history eliminated already after the group stage.*For the first time in the history of the World Cup, a non-European and non-American team (Senegal) has scored 2+ goals against the host of the tournament (Qatar).*Netherlands (1-1 vs Ecuador) have made only 2 shots (1 on goal that has been a goal and 1 away). It is the lowest ever number of shots for “Oranje” in a World Cup match.*Ecuador have finished their series of 7 clean sheets in all competitions (and including friendlies).*England have played (vs USA) their 12th goalless draw at the World Cup; the most of any team in the tournament's history. Brazil (9) and  Uruguay (8) are the next.*From the first 20 games of 2022 World Cup, five ended up 0-0. There is only one precedent in the tournament's history: also five 0-0 draws in the first 20 games of the 1974 edition.*England haven't won any of their three games against the USA at the World Cup: 2 draws, 1 loss (the epic one in 1950).*Fenerbahçe players have scored the most goals at the 2022 World Cup so far – 4 (Enner Valencia 3 and Michy Batshuayi 1). Paris Saint-Germain, Barcelona and Milan collected 3 goals each.