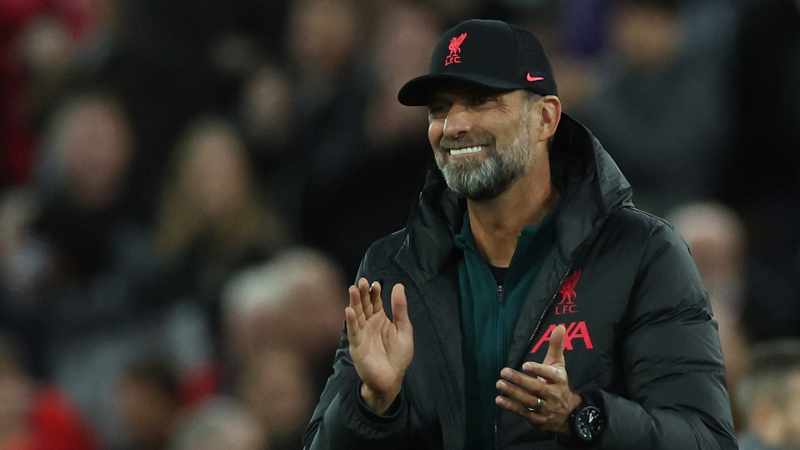 Picture : Jürgen Klopp reached the mark of 400 matches with Liverpool !

Statistics on Champions’ League group stage round 6 (November 1)*Bayern are the first team in the entire Champions League history to win all 6 games at group stage 3 times (in 2019-20, 2021-22 and 2022-23) and to do it twice in a row.Real Madrid had 2 all-win group stages, Milan, PSG, Spartak Moscow, Barcelona, Ajax and Liverpool one each.*The game vs Napoli (2-0) marked two milestones at once for Liverpool coach Jürgen Klopp. He became the 7th coach to take charge of 100+ Champions League games. Only Pep Guardiola (61) achieved more wins from his first 100 games in the competition than him (58).*Also, Klopp became the 4th Liverpool coach to reach 400 matches in all competitions (with Bob Paisley 535, Tom Watson 743 and Bill Shankly 783 ahead). No one of named persons has won as many games within his first 400 matches as Klopp (243).*Mohamed Salah (Liverpool) has scored in his 5th consecutive Champions League game: longest scoring streak in this season of UCL so far.*Rangers (1-3 vs Ajaх in last group game) finished the group stage with -20 (2-22) goal difference. It is the worst for a team that lost all 6 group stage games in Champions League in history.Dinamo Zagreb had -19 goal difference in the season 2011-12, and now Viktoria Plzen also finished the group with 0 points and -19 goal difference.*22 goals is not the most Rangers ever conceded for a single European Cup/UCL campaign. In 1959-60 (when they were semifinalists!) they got 23. These are only two cases in the competition history for any Scottish team to concede 20+ goals.*James Tavernier’s consolation goal for Rangers is his 20th in all competitions in 2022. He is the first defender (right-back) in XXI century to reach 20 goals in a single calendar year.*Napoli have stopped their impressive streak of 13 wins in all competitions, longest in club history.*Porto became the 2nd club in UCL history to win the group after losing both of their opening 2 matches (the first to do it was Panathinaikos in 2008-09) and the first to achieve 4 victories in a row after losing two at the start of the group stage (Panathinaikos in 2008-09 had 3 wins and 1 draw).*Eintracht became the 5th team in UCL history (and first in 17 years) to advance from the group being solitarily lowest scoring team in their group and having a negative goal difference. Other such teams were: Sturm Graz in 2000-01, Bayer in 2002-03, Valencia in 2002-03 (2nd group phase) and PSV in 2005-06.