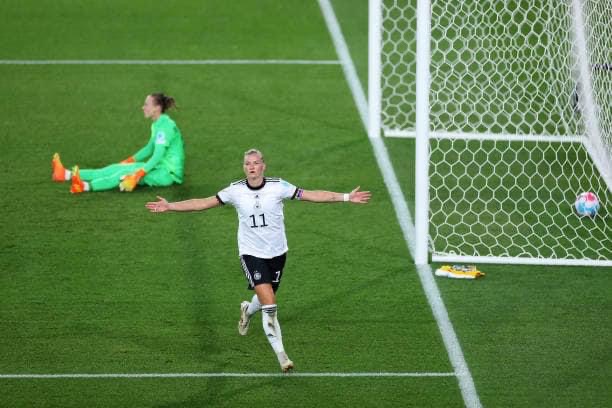 Picture : Alexandra Popp scored twice to book the Euro final. Germany will face England on Sunday in Wembley before a record crow of 90000 spectators !

They made it ! Germany will go in search of their ninth European Championship title on Sunday as they booked their place in the Euro 2022 final with a 2-1 victory over France on Wednesday evening. Goals from Alexandra Popp either side of half time set up an encounter with England on Sunday in a repeat of the Euro 2009 final. A pulsating, end to end encounter saw the deadlock broken by Germany six minutes before the break. Jule Brand combined neatly with Svenja Huth down the right flank, and the latter's delivery was crashed into the roof of the net by Popp. Their lead would not last long, 6 minutes exactly. Diani's arrowing snapshot from range cannoned off the post and into the net off the unfortunate Merle Frohms.

Selma Bacha entered and Diani moved to the number nine role at half time, and the switch almost paid dividends for France just after the hour mark. Bacha’s effort was blocked by the head of Kathrin-Julia Hendrich and from the resulting corner, Wendie Renard drew a good stop from Frohms with a back post header. However, it was Germany who retook the lead with 14 minutes remaining. Huth again provided the assist with a curling cross from the right, and Popp rose highest to plant a bullet header past Pauline Peyraud-Magnin. Alexandra Popp and the young Lena Oberdorf lead their team to the final !