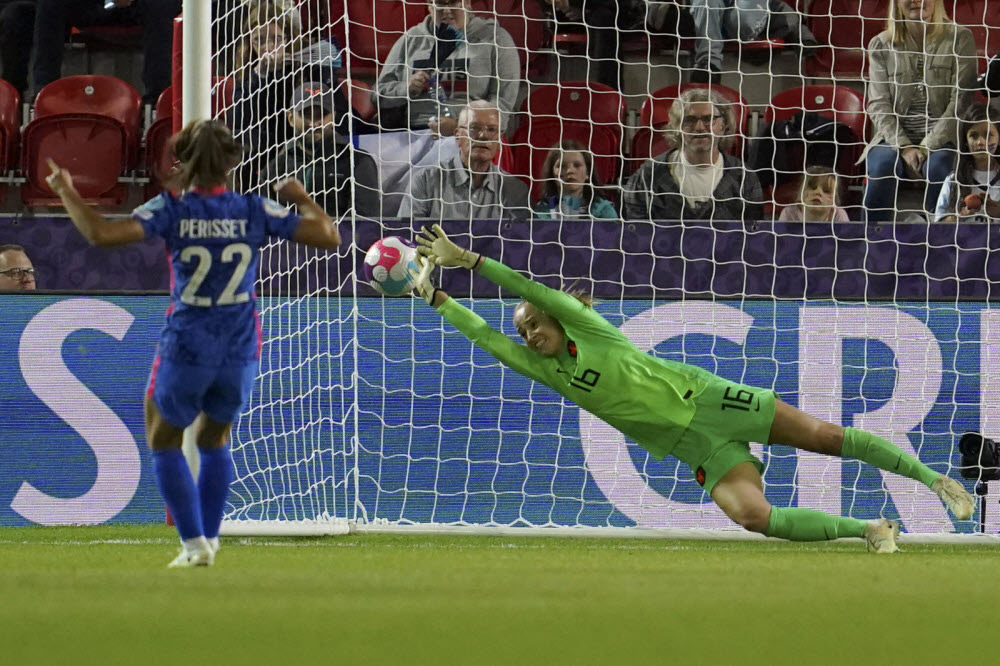 Picture : Eve Perisset scored the winning goal with a penalty..

France will face Germany next Wednesday in the first semi final of the EURO 2022 ! France ended its run of quarter-final exits in major tournaments by beating the Netherlands after extra time to advance to the last four of the Women's European Championship for the first time ! Eve Perisset converted a penalty in the 102nd minute, following Dominique Janssen's foul on Kadidiatou Diani after the intervention of Var, to end the title defense of the Dutch. The French exited in the last eight in their last five international tournaments - Euro 2013, the World Cup in 2015, the Olympics in 2016, Euro 2017 and the World Cup in 2019 - but the curse is finally over, France reaching the last 4 of a major tournament for the second time in History (World Cup 2011). An exciting, end-to-end game went to extra time only thanks to the lack of efficiency of the French team, that dominated all the game , having more than 32 shoots but the brilliance of Netherlands young goalkeeper Daphne van Domselaar, filling in once again for Sari van Veenendaal following the Dutch captain's campaign-ending shoulder injury against Sweden in the group stage, made the difference long time, she saved 10 great France opportunities !

Her best save came in the final minute of stoppage time, when she saved a header from Wendie Renard. A minute earlier, Van Domselaar defied Delphine Cascarino at the near post having also saved well from the winger early in the first half.  France also struck the post through Cascarino, while Dutch defender Stefanie van der Gragt twice blocked shots on the goal-line in the first half.