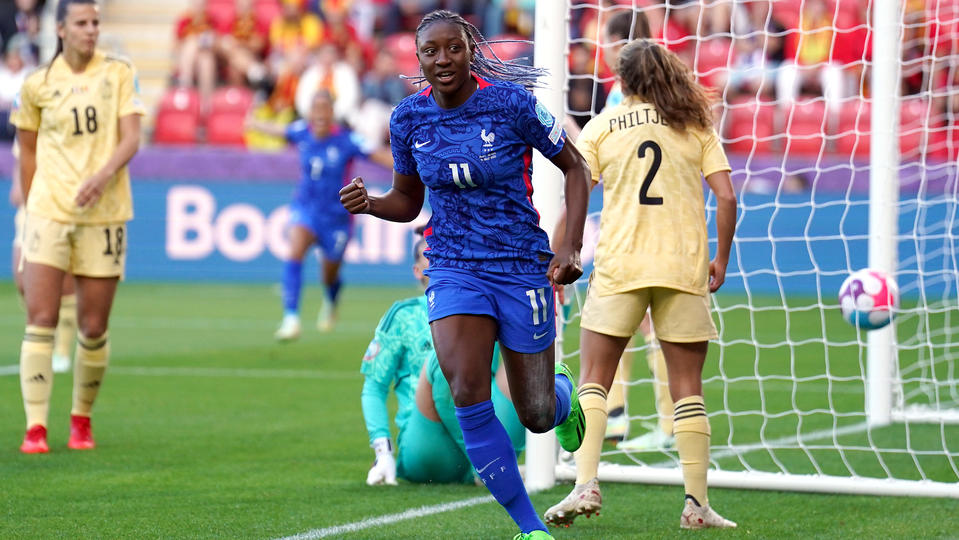 France secured their passage through to the knockout round of the women's Euros as Group D winners after a 2-1 victory over Belgium. They started their second game impressively too, going ahead after only six minutes when Kadidiatou Diani leaped highest at the back post to nod a Sakina Karchaoui cross into the back of the net. But the French were pegged back on 36 minutes with Belgium’s first shot of the match, when Janice Cayman poked a through ball from Tessa Wullaert past the oncoming Pauline Peyraud-Magnin.

Les Bleues had been completely dominant and did go into the break ahead : Clara Mateo whipped another delivery into the box, where Griedge Mbock Bathy was waiting to head home. France should have added a third heading into injury time, when a penalty was awarded for an Amber Tysiak handball. Wendie Renard's penalty was saved by Belgium’s Goalkeeper Evrard, before she missed an open goal on the rebound. France saw out the remaining minutes to clinch Group D and get them into the next round.

Italy and Iceland will take their bid to reach the Euro 2022 quarter-finals down to the last group game after sharing a 1-1 draw on Thursday. Karolina Lea Vilhjalmsdottir put Iceland ahead in the third minute with a sliced finished after Sveindis Jane Jonsdottir's long throw into the penalty area exposed Italy's defence.

But Italy midfielder Valentina Bergamaschi equalised from Barbara Bonansea's cut-back to ensure a share of the spoils at Manchester City's Academy Stadium. It was the second successive game that Iceland had blown the lead after drawing with Belgium despite having 23 attempts on goal.

Italy, who reached the 2019 World Cup quarter-finals, were inches away from snatching a late winner when Bonansea's strike was tipped onto the inside of the post by Sandra Sigurdardottir. Iceland have two points from two games and Italy have one point, with France and Belgium playing in the late Group D match on Thursday. Both Iceland and Italy, thrashed 5-1 by France in their first game, will remain in contention for a place in the knockout stages in their group finale on Monday. Iceland face France in their final game, while Italy take on Belgium.