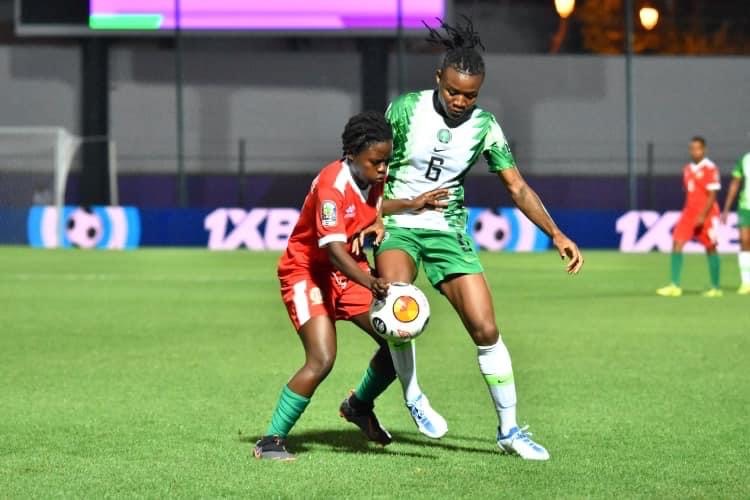 If the fourth fixture was known 24 hours earlier, the first three were known Sunday night at the end of group C matches which formally brought the first round of the tournament to an end.

The fixture to pit Cameroon against Nigeria is tipped to lay bare the eccentric values of women’s football made in Africa. After losing their first game 1-2 to South Africa, Nigeria quickly rallied from the potholes to demonstrate their durability, defeating Botswana 2-0 in their second game, and ultimately soaring to their customary heights in the tournament with a 4-0 trouncing of Burundi Sunday night. It was Rasheedat Ajibade who blew the lid off the Burundian vessel transforming a 22nd minute penalty. Keeper Jeanine Irakoze who would leave the pitch following an injury sustained in committing  the foul on Rasheedat in the box was replaced by 16-year old Inarunkundo Amissa. The inexperienced newcomer took two quick goals in the 28th and 29th  minutes courtesy of Peace Efih and Uchenna Kanu, respectively. The last Nigerian nail on the Burundian coffin was hammered in by Kanu in the 46th minute who celebrated a brace on the night and justifiably the Woman-of-the-Match Award.

In the parallel match at the Prince Moulay Abdellah Stadium was a clash of two rivals in the COSAFA tournament. No wonder, Botswana held on resolutely in the confrontation which laid bare South Africa frailty when pitted against a truly resilient opponent. Thembi Kgatlana, Kholosa Biyana and Mapula Kgoale found goalkeeper Maitumelo Sedilame quite an impervious rock at goal. However, when Kgatlana was replaced, the new woman on duty, Nthabiseng Majiya came in with the antidote breaking the keeper’s resilience after the latter had blocked Veronicah Mogotsi’s close range shot. The 81st minute goal handed South Africa the 1-0 victory. Group C thus closed  with South Africa tallying 9 pts, Nigeria 6 pts, Botswana 3 pts and Burundi 0 pt.

The four teams to emerge from the quarterfinals scheduled for this Wednesday(Zambia vs Senegal at 6 p.m. ; Morocco vs Botswana at 9 p.m.), and Thursday(Cameroon vs Nigeria at 6 p.m. ; South Africa vs Tunisia at 9 p.m.) will represent the African continent at next year’s FIFA World Cup in Australia and New Zealand with two more openings available after Confederations playoffs.