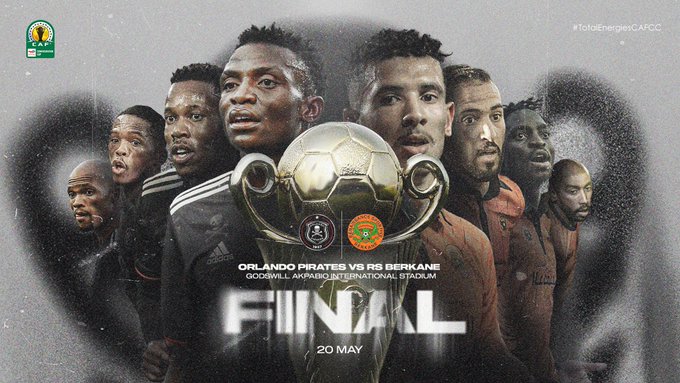 The fixture was established this Sunday night following the second leg semifinals played at the Orlando Stadium in Johannesburg  and Stade Municipal de Berkane, during which Pirates qualified on a 2-1 aggregate, and RSB obtained qualification on a 4-1 aggregate, respectively. The first to qualify, Orlando Pirates survived a scare at the hands of Al Ahli of Tripoli whom they had defeated in the first leg, 0-2. The visitors displayed true attacking football against their resilient hosts. Going by the numbers, Ahli had a 55% possession as against 45%; firing 13 shots and having 7 on target as against 3 shots on target in 8 trials for their opponents. And it was one of the shots on target that registered the lone goal in the 89th minute through Ali Abu Arqoub. The 2015 runners up, Orlando Pirates lost at home 0-1 but qualified for the final on a 2-1 aggregate.

At the Stade Municipal de Berkane, the hosts bounced back from a 0-1 first leg defeat to trounce TP Mazembe 4-1. Bakr El Helali volleyed from the edge of the box in the 10th minute to give RSB the lead. But then Philippe Beni Kinzumbi drew level a minute later following a defense folly.  Tandi Mwape compromised TP chances when he took a second yellow card to leave the pitch in the 64th minute. With less opposition, RSB pressed on to register the second goal through a header by Larbi Naji in the 79th minute. Hopes still reigned in TP camp until Congolese-born trainer for RSB, Florent Ibenge found the key to unlock the success story for his side following a late brace by Youssef El Fahli when he scored an 88th minute penalty and the 4th goal for his side 6 minutes into stoppage time. By the numbers, RSB had shot 19 times with 6 on target as against 2 shots on target from 5 attempts; 8 corners for RSB as against 1 for TP.

RSB Berkane, 2019/20 champions and last year's runners up will confront 2015 runners up  Orlando Pirates for the 2022 TotalEnergies CAF Confederation Cup on Friday May 20 at the Ikpabio International Stadium, Uyo, Nigeria.