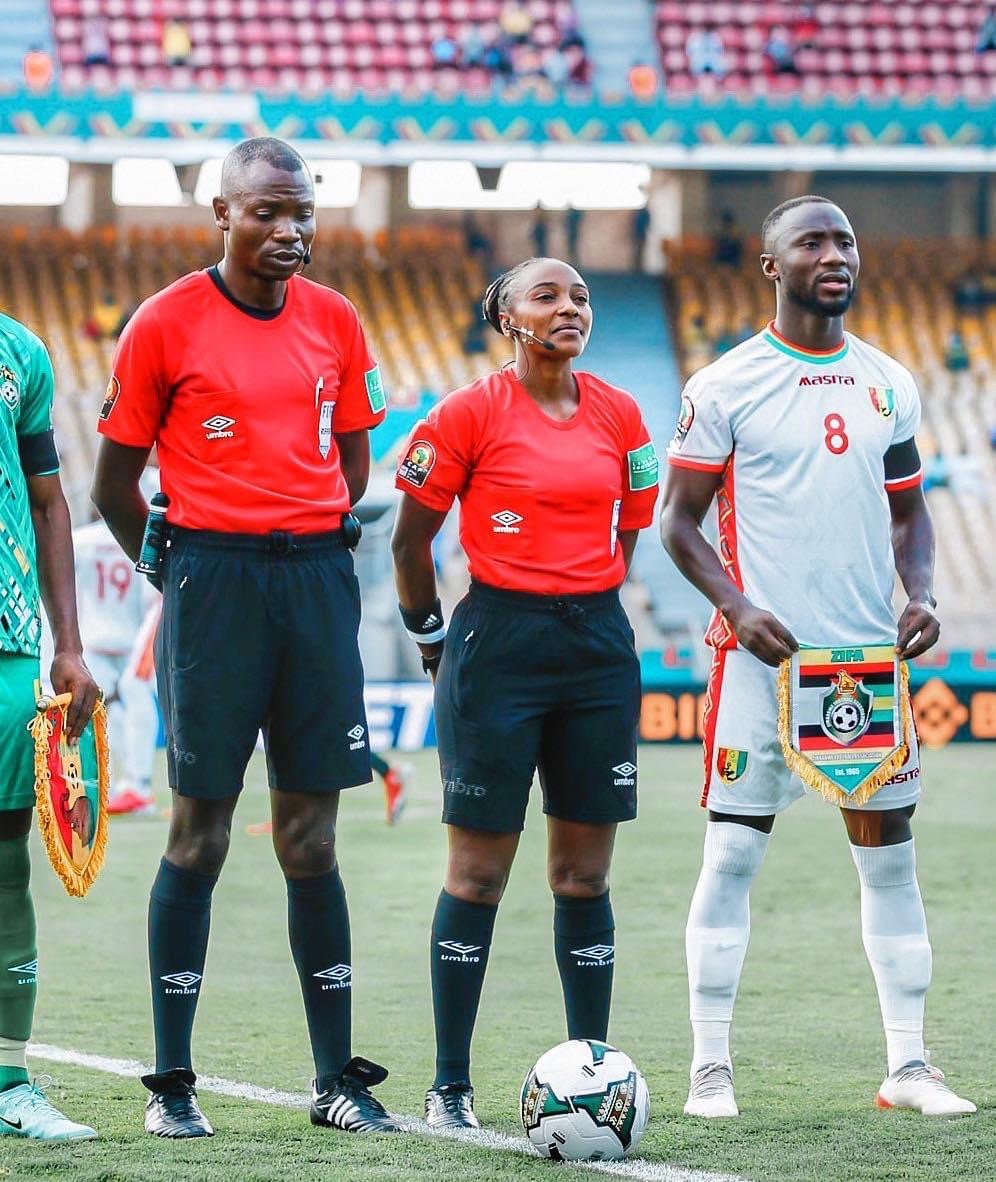 Rwandan referee, Salima Rhadia Mukansanga has become the first woman to referee a match at the men’s Africa Cup of Nations. The 34-year-old professional nurse who had been an official at the 2019 FIFA Women’s World Cup, officiated at the Olympics, Africa Women’s Cup of Nations and CAF Women’s Champions League was in charge of the Zimbabwe vs Guinea group B game at the Mfandena during which her commendable mastery of the exercise was accompanied by an upset of Guinea by Zimbabwe 2-1.

Captain Knowledge Musona of Zimbabwe headed the ball past the keeper following a cross in the 26th minute. His teammate, Kudakwashe Mahachi sent a thunderbolt of a shot from near 22 metres, blinding the keeper and putting his side up 2-0 in the 43rd minute. As the competitive game evolved, it was Guinean chance in the 47th minute when captain Naby Keita found the net from almost the same spot and manner of the second goal for Zimbabwe. At the end of the game, Zimbabwe defender, John Gerald Takwara emerged the most valuable player.

In the second group game played simultaneously at the Kouekong stadium, 20th-ranked Senegal failed to dominate 129th-ranked Malawi in a game many believe the minnows should have been awarded the 76th minute penalty in spite of VAR ruling it wasn’t. Incessant raids by Sadio Mane and teammates failed to intimidate the Malawians whose ability to fight back was quite convincing. They did produce a scare for Senegal whose efforts were valiantly fought off by a particularly performing goalkeeper Charles Thom who emerged the most valuable player. At sunset, Senegal and Guinea qualified for the round of 16 with Malawi still having a chance for same. The group closed thus: Senegal 5pts, Guinea 4pts, Malawi 4pts and Zimbabwe with 3pts are the second side to be eliminated from the tournament.

But the drama of the night came from group C where Morocco and Gabon, in that order, qualified for the round of 16. Yet, debutants, Comoros were the David who dismembered Goliath, Ghana whose captain André Ayew took a red card for fouling the subsequently replaced keeper Boina in the 25th minute of their game to play 10 against 11 all through. Comoros made their ambitions unmistaken when El-Fardou Ben Mohamed tore away from his markers to raise the curtains in the 4th minute. The Roumde Adjia stadium went wild for the second time in the 61st minute following the second goal from Comoros courtesy of Ahmed Mogni who found the net with a left foot strike. Ghana found solace in the 64th minute in their first goal by substitute Richmond Boakye who headed a corner kick straight into the net. Still from a corner kick in the 77th minute, Alexander Djiku drove home and put scores at 2-2. But then, Ahmed Mogni emphatically connected a cross from the flank into the net to make it a historic 3-2 victory for the Comoros. Their player, El Fardou was voted the most valuable player.

Ahmed Mogni and the Comores with a historic victory against Ghana !

At the Ahmadou Ahidjo Stadium at Mfandena, the dismissal from camp of captain Pierre Emerick Aubameyang and two others for breaking bounds and returning to base reportedly sloshed rather energized the Panthers who held their own against the Atlas Lions of Morocco. Gabon opened scores in the 21st minute when Jim Allevinah capitalized on mix up in the Moroccan half. A joint effort by André Poko and his keeper, Jean Noel Amonome brought down Soufiane Boufal in the box for a penalty, later transformed by the victim himself. An own goal in the 81st minute by Nayef Aguerd gave Gabon a 2-1 lead only to be caught up with in the 84th minute by Achraf Hakimi whose sumptuous free kick from 30 metres flew straight into the net . Gabonese player, Jim Allevinah was voted the most valuable player of the match. At the end of the first round, group C stands as follows: Morocco 7pts, Gabon 5pts, Comoros 3pts, Ghana 1pt.

Two matches are on schedule this Wednesday. Guinea Bissau vs Nigeria at the Roumde Adjia Stadium, and Egypt vs Sudan at the Ahmadou Ahidjo Stadium Mfandena; both group D games kick off simultaneously at 8 p.m.