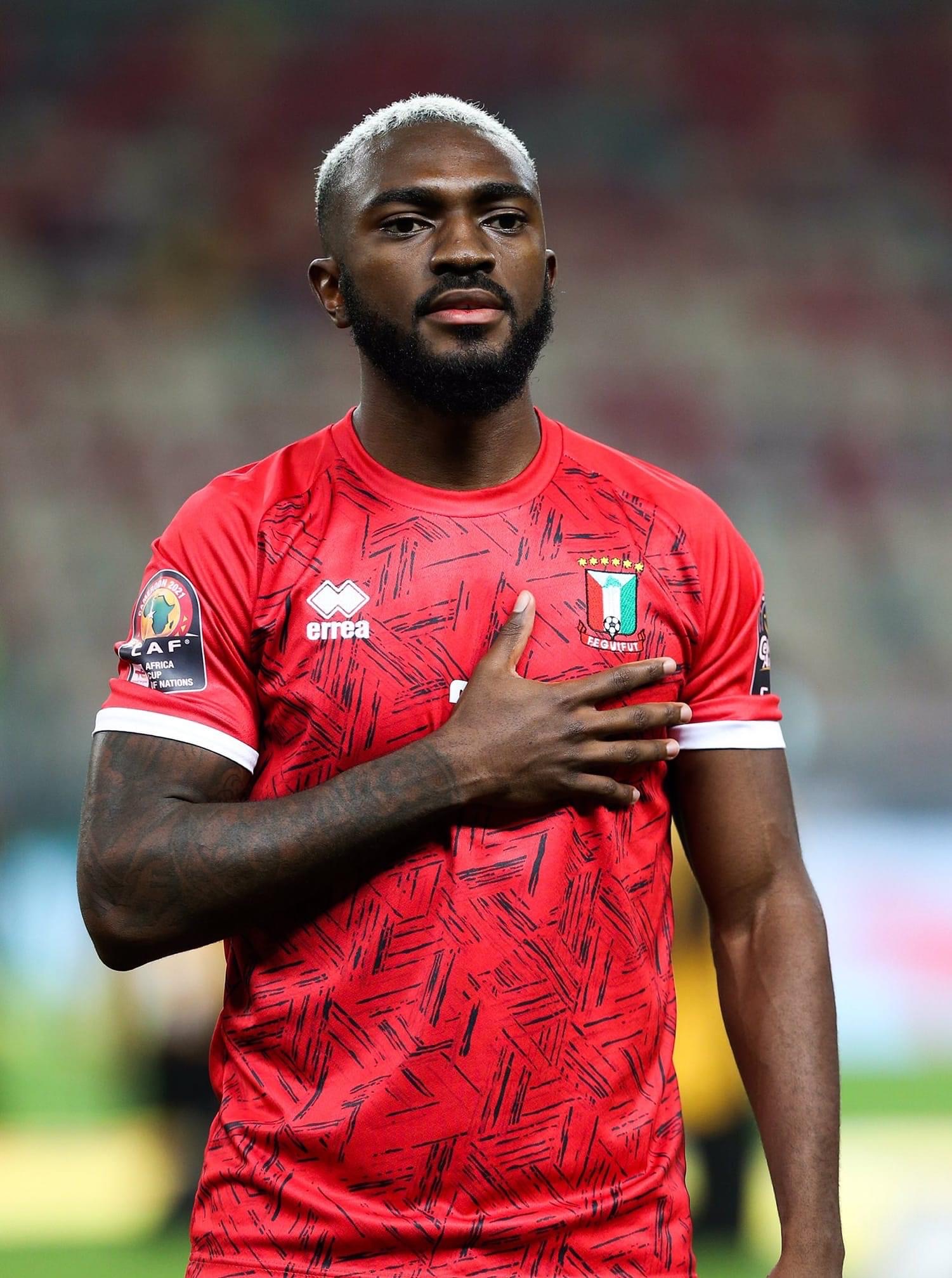 Picture : Esteban Orozco made History yesterday, scoring the winning goal for Equatorial Guinea and stopping the undefeated serie of Algeria !

Dramatic finishes as match-day 2 closes at the AFCON.

Nzalang National of Equatorial Guinea stepped on the battle front with the Mediterranean Knights of Algeria with bookmakers writing them off and offering the evens entirely to the defending champions, undefeated in 35 matches over the past three years. But, not only did Algeria see a melodramatic end to their invincibility, but also found their chances reduced to cotton floating over a chimney. In their 14th game ever for 5 victories each from earlier meetings, the two stretched their knowledge of each other to elastic limits for 70 minutes. And then at that sublime moment of deliberations,  Esteban Orozco Fernandez squeezed the cutback into the net with a blistering grounder for the lone goal and match winner. They later dissolved all attempts by Algeria to bounce back, and even offered themselves the luxury of transforming the knights into practice posts as they rumbled in their half with astonishing simplicity. By defeating Algeria 1-0 Equatorial Guinea put an end to their run of invincibility as Salvador Edu lifted the most valuable player trophy.

In the second match, Ivory Coast and Sierra Leone met for the 8th time ever with the Ivorians having won 6 games as against 1 draw in previous outings. But the figures failed to influence the outcome of a match the Ivorians hoped would qualify them for the round of 16. It began poorly for them when Frank Kessié’s 7th minute penalty was brilliantly parried away by the excellent goalkeeper Mohamed Kamara. But then marksman, Sébastien Haller broke the jinx on 25 minutes when he received a through ball to capitalize on poor defending. Nicolas Pépé was to put his side further beyond Sierra Leonean reach with a 67th minute grounder that beat the keeper to the tight angle. However, Musa Barrow gave Sierra Leone a lifeline on 55 minutes when he blinded keeper Ali Badra with a stupendous left foot drive. The Ivorians were later to regret the miss by substitute Hamed Traoré on 78 minutes when Alhadji Kamara scored an ultimate equalizer 3 minutes into stoppage time in what was a dramatic finish. Keeper Ali Badra had fatally fumbled with a headed back pass from his last defender to offer the opponents the chance to heave a sigh of relief. Badra would be replaced by captain Serge Aurier as the former was stretchered out of the field seconds to fulltime. Ivorian player, Nicolas Pépé was awarded the most valuable player trophy. Tonight, group E stands at: Ivory Coast 4pts, Equatorial Guinea 3pts, Sierra Leone 2pts and Algeria 1pt.

Earlier in the day, it had begun at the Ngeme Sports Stadium in Limbe where group F matches produced such drama as to prevent a qualifier yet for the round of 16 from the group. World 150th-ranked Gambia gave 50th-ranked Mali a last minute shocker for both teams to separate on a 1-1 score. Tactics and technical ability failed to produce goals, and so physical fitness came into play, prompting a fatal body-check in the Gambian area. The referee consulted the VAR to validate same. Ibrahima Kone became the second player in the tournament to score two penalties when he took from the spot to put Mali up 1-0. The hard-fighting Gambians held their own, orchestrating a penalty on 90 minutes which the referee had to consult with the VAR to confirm that the ball hand actually been touched with the hand in the area. Musa Barrow took the penalty and scored as Mali’s midfielder, Yves Bissouma went home with the most valuable player trophy.

In the second group game, Tunisia recovered from the 0-1 defeat at the hands of Mali to spank Mauritania 4-0. They were already up in the first half 2-0 after two strikes by Hamza Mathlouti on 4 minutes and Wahbi Khazri on 8 minutes. Attempts by Al-Murabitun of Mauritania to recover from the double peck by the Carthage Eagles fell short of efficiency as Wahbi Khazri made it a brace on 64 minutes. Seifeddine Jaziri scored the 4th goal in the 66th minute as Mauritania saw red in a match that registered a huge turnout on the spectators stands. Tunisia with the largest goals margin so far in the tournament almost made it 5-0 had the 90th minute penalty  not seen the ball ricocheting on the woodwork. Wahbi Khazri was crowned the best player of the match. After two match-days, Gambia tally 4pts, Mali 4pts, Tunisia 3pts and Mauritania 0pt.