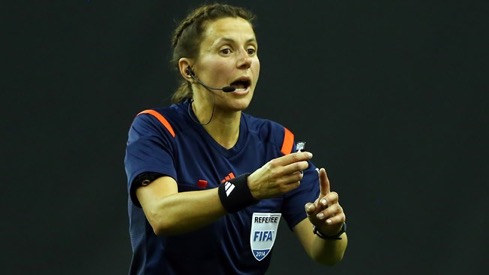 Kateryna Monzul for the first time !

Ukraine stepped on the world stage today when Kateryna Monzul was named as the IFFHS 2015 World’s Best Woman Referee.

Monzul won huge support from football experts in 50 countries around the world in the 4th Annual IFFHS Women’s Awards after being placed among the top five referees in voting over the last three years.

She scored a total  of 114 points to win by 79 points in relegating Bibiana Steinhaus, winner of the two past years, who could only poll 35, just one ahead of Swiss Esther Stäubli in third place.

Monzul, sho is 34, began her international career in 2005 and made such progress that she was given control of the final of the World Cup 2015 in Canada between USA and Japan, one year after the final of the UEFA Champions League.

Esther Stäubli has been regularly elected in the Top 5 since 4 years. The surprise in the voting was the selection of New zealand’s Anna Marie Keighley who began her international career only in 2010 and is already in the World’s Top 4.