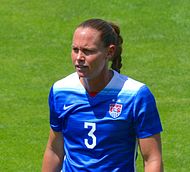 She is an American professional soccer defender. She is the former captain of the United States women's national soccer team. Pearce is a 3-time Olympic gold medalist, and also a 2-time FIFA Women's World Cup champion. Pearce has played in five FIFA Women's World Cup finals and four Olympics women's football tournaments. She is a 1999 and 2015 FIFA Women's World Cup champion, and a three-time gold medalist having won championship titles at the 2004 Athens Olympics, 2008 Beijing Olympics and 2012 London Olympics. She has finished no lower than third place in each of the World Cup or Olympic tournaments in which she has competed. Pearce played in the W-League from 1997 through 1998. She played in two American professional leagues the entire time they were in operation; from 2001 through 2003 in the WUSA and from 2009 through 2011 in the WPS. In 2009, while playing for Sky Blue FC, she simultaneously served as coach of the club while winning the 2009 Women's Professional Soccer Playoffs, and was named WPS Sportswoman of the Year. Pearce was the oldest player to appear in a FIFA Women's World Cup game (at age 40) until Formiga competed in the 2019 FIFA Women's World Cup at the age of 41. With 311 caps, Pearce is also the second-most capped player, male or female, in U.S. and world history, after Kristine Lilly. Pearce played for Central Jersey Splash and New Jersey Lady Stallions, in 1997 and 1998 respectively, of the W-League. In 2001, she was selected as a member of New York Power, a professional soccer team in Women's United Soccer Association. In the first year, Christie played every minute of the first 18 games until tearing her anterior cruciate ligament, sidelining her for the rest of the season. In 2002, Christie bounced back to play in 1699 minutes over 19 games, and another 18 games in 2003 in addition to her national team duties. Shortly after concluding its third season, the WUSA suspended all operations. In anticipation of an eventual relaunch, WUSA preserved its rights in the team names, logos and similar properties. The next attempt at women's professional soccer in the United States kicked off in 2008 under the name of Women's Professional Soccer. On September 16, 2008, the initial WPS player allocation was conducted and Pearce was chosen as captain for New Jersey's Sky Blue FC with fellow US Women's National Team players Heather O'Reilly and Natasha Kai. In its inaugural season, Pearce and Sky Blue FC struggled, including the suspension of their first head coach Ian Sawyers and the resignation of his successor, Kelly Lindsey. In July 2009, the Sky Blue organization announced that Pearce would serve as the caretaker coach, in addition to her playing duties, for the remainder of the WPS season. After taking on the position as head coach, the third in one season for Sky Blue FC, Pearce took her team on to win the 2009 Women's Professional Soccer Playoffs. It was later revealed she was almost three months pregnant with her second child at the time of the match. One week later, she was named WPS Sportswoman of the Year. She remained with Sky Blue in a playing role for 2010 before switching to magicJack ahead of the 2011 Women's Professional Soccer. On January 11, 2013 Pearce was one of three members from the United States women's national team that was allocated to the new NWSL club Sky Blue FC, along with Jillian Loyden and Kelley O'Hara. 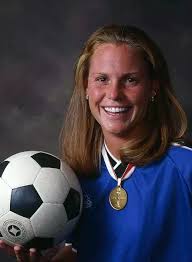 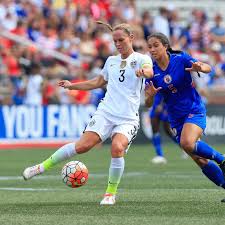 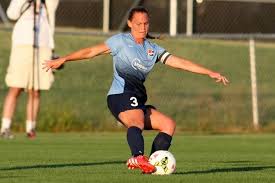