He is a Bulgarian former Professional footballer who is currently a football commentator for Univision Deportes. A prolific forward, he is regarded as one of the best players of his generation and is widely considered one of the greatest Bulgarian footballers of all time. He was runner-up for the FIFA World Player of the Year award in 1992 and 1994, and received the Ballon d'Or in 1994. In 2004, Stoichkov was named by Pelé in the FIFA 100 list of the world's greatest living players. At club level, Stoichkov spent six years at CSKA Sofia and became the top goalscorer in Europe in 1990, receiving the European Golden Shoe. In 1990, he joined Barcelona where he earned the Spanish nickname "El Pistolero" ("The Gunslinger"), and was part of Johan Cruyff 's “Dream Team” that won four consecutive La Liga titles and one UEFA Champions League. During his time at the club, he formed a lethal strike partnership with Romário. Cruyff was largely instrumental in bringing him to Barcelona where he quickly developed into one of the most prolific forwards in the world. Stoichkov was a member of the Bulgaria national team that finished fourth at the 1994 FIFA World Cup, of which he was the top scorer with six goals and received the World Cup Golden Shoe. He was ranked the third best player at the World Cup, after Romário and Roberto Baggio, and received the World Cup Bronze Ball. Apart from his footballing talent, he was notable for his on-pitch temper. In his playing career he was also Nicknamed The Dagger (Камата). In early 1985, Stoichkov Joined CSKA Sofia. At the beginning of his five-year stay at CSKA, Stoichkov (who later became famous for his short temper) became involved in a fight during the 1985 Bulgarian Cup Final, which resulted in an original lifelong ban, later reduced to a year suspension. He made his comeback for CSKA on 30 April 1986, in a 3–1 away win over Sliven in a game of the Cup of the Soviet Army. On 21 May, Stoichkov opened the scoring in the final of tournament against Lokomotiv Sofia, which CSKA won 2–0. He continued his progress during 1986–87, becoming a regular in the left side of CSKA's attack. Stoichkov collected his first A Group title winner's medal at the end of the season. He scored 6 league goals that season. European Golden Boot with CSKA by scoring 38 goals in 30 matches during the 1989–90 A Group season. After five years with CSKA, Stoichkov transferred to Barcelona. In his first season with the club, Stoichkov was suspended for two months for stomping on a referee's foot, but he still scored 14 league goals and 6 more in the European Cup Winners' Cup. He became part of manager Johan Cruyff's “Dream Team” and helped Barcelona to one of the most successful eras of the club, winning La Liga four years in a row between 1991 and 1994 and the European Cup after defeating Sampdoria in 1992. During his stay in Barcelona, he became an idol for the club's fans, and played in tandem with Romário in attack. Stoichkov was also known for making sure Romario attended training sessions on time, as the latter often indulged in late-night fiestas. FIFA World Player of the Year, in 1992 and 1994, and he won the 1994 Ballon d'Or after leading his national team to the 1994 World Cup semi-finals. Stoichkov then had a short spell in Italy with scoring a total of seven goals and soon returned to FC Barcelona where he played until early '98. In April 1998 he signed a two-match contract for Saudi Arabian club Al-Nassr helping them win the Asian Cup Winners' Cup. In the semi-final against Kopetdag, he earned a penalty and assisted the winning goal and in the final against Suwon Bluewings, he scored the only goal in the 12th minute. For those two games Hristo received $200.000. He subsequently went in Japan to play with Kashiwa Reysol, before finishing his career in the United States with the Chicago Fire and D.C. United, winning the U.S. Open Cup (and scoring the first goal in the final) with the former Bulgaria national team in a UEFA Euro 1988 qualifying match against Belgium on 23 September 1987. He scored his first international goal in his fourth appearance, a 3–2 friendly defeat of Qatar in Doha. During qualification for the 1994 FIFA World Cup, Stoichkov scored five goals to help Bulgaria qualify for its first major tournament since the 1986 World Cup. At the tournament finals, Stoichkov was awarded the World Cup Golden Boot as the joint top goal scorer of the tournament (with Oleg Salenko), with six goals, as well as earning the Bronze Ball award. He led Bulgaria past Germany in the quarter-finals 2–1, a shock result as Germany were then-defending champions. In the semi-finals, Bulgaria lost 2–1 to Italy. They subsequently lost the third place play-off to Sweden, 4–0. Bulgaria finished second in the qualifying group for Euro 1996 behind Germany. Stoichkov scored ten goals for his team during the qualifiers, as Bulgaria qualified as one of the best six runners-up. In the first match against Germany in Sofia, Bulgaria were 2–0 down at half-time. Stoichkov equalized with two goals from penalties and Emil Kostadinov, also scored for a 3–2 win. Bulgaria lost the second match in Germany 3–1. During the finals, Bulgaria lost 3–1 in the decisive group match against a strong France side; in the other match, Spain won 2–1 against Romania and so the Bulgarians went out. In that tournament, Stoichkov scored three goals in three matches. 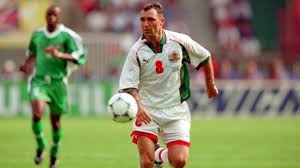 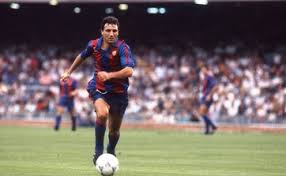 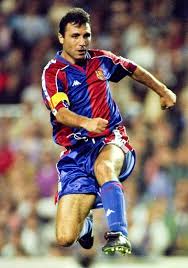