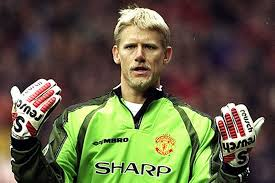 He is a Danish former Professional footballer who played as a goalkeeper, and was voted the IFFHS World's Best Goalkeeper in 1992 and 1993. He is best remembered for his most successful years at English club, whom he captained to victory in the 1999 UEFA Champions League Final to complete the Treble, and for winning UEFA Euro 1992 with Denmark. Born in Gladsaxe Copenhagen, Schmeichel was famous for his intimidating physique – at 1.91m (6 ft 3 in) tall and weighing close to 100kg (15 st 10 lb) during his playing days – and wore specially made size XXXL football shirts. A fierce competitor, he was known for his loud, unstinting criticism of perceived mistakes by his defenders. Unusually for a goalkeeper, Schmeichel scored 10 goals during his career, including one for the national team. He is also the most capped player for the Denmark national team, with 129 games between 1987 and 2001. In addition to Euro 92, he played for his country at the 1998 FIFA World Cup and three additional European Championship tournaments. He captained the national team in 30 matches. He also represented Gladsaxe Hero, Hvidovre,Brøndby, Sporting CP, Aston Villa, and Manchester City in a career that lasted from 1981 until 2003 and yielded 24 trophies. IFFHS ranked Schmeichel among the top ten keepers of the 20th Century in 2000, and in 2001, Schmeichel won a public poll held by Reuters, when the majority of the 200,000 participants voted him as the best goalkeeper ever, ahead of Lev Yashin and Gordon Banks. In 2003, Schmeichel was inducted into the English Football Hall of Fame in recognition of his impact on the English game. In March 2004, he was named as one of the "125 greatest living footballers", at the FIFA 100 celebrations. His son, Kasper is also a professional goalkeeper, currently playing for Premier League side and the Danish national team. 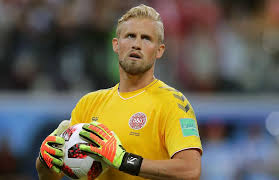 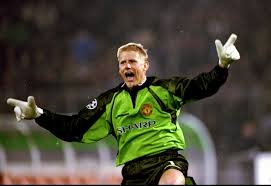 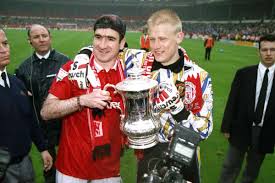 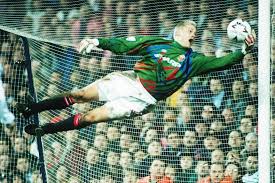