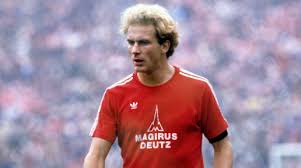 He had his greatest career success with German club Bayern Munich, where he won the Intercontinental Cup, two European Cups, as well as two league titles and two domestic cups. A member of the West Germany national team, Rummenigge won the 1980 European Championship and was part of the squad that finished runner-up in the 1982 FIFA World Cup and at the 1986 World Cup. He was also honoured twice as European Footballer of the Year. He is currently the Chairman of Executive Board of FC Bayern München AG, a daughter company of Bundesliga team. Rummenigge is a former chairman of the European Club Association, serving in that capacity from 2008 until 2017. He joined Bayern Munich in 1974, coming from the Westphalian amateur side Borussia Lippstadt, for a transfer fee of ca. €10,000. He immediately showed great strength as a dribbler. His scoring qualities were initially insignificant, but would find great improvement in later years, particularly after the arrival of coach Pal Csernai in 1979. In 1979–80, he scored 26 goals and became for the first time the Bundesliga's top striker, a feat he repeated in 1981 and 1984 with 29 and 26 goals, respectively. With Bayern he won the European Cup in 1975 and 1976. In 1975, he did not take part in the final of the competition, whilst in the year thereafter a glass of brandy sufficiently prepared the nervous Rummenigge to contribute to the defeat of AS Saint-Étienne. In the same year he became also part of the team that prevailed in the Intercontinental Cup finals against Cruzeiro EC from Belo Horizonte. In the era of coach Csernai he found in midfielder Paul Breitner a congenial partner and he formed such a formidable one-two-punch that they were only called Breitnigge (name invented by German newspaper Bild). The club, then often dubbed as "FC Breitnigge", won in this period the Bundesliga Title in 1980 and 1981, and the DFB-Pokal in 1982 and 1984. A renewed triumph in the European Cup was denied, when the club lost the 1982 final narrowly against Aston Villa. In the season before Rummenigge was top-scorer in this competition with 6 Goals. His substantial contribution to the successes of the club and the German national football team found also expression in personal honours. In 1980, he was named German Footballer of the Year and in '80–81 the European Footballer of the Year. In 1984, aged 29, he was sold for a record fee of €5.7m to Inter Milan. Despite a notable beginning, in which he helped the team to compete until the end for the 1984–85 Scudetto, Rumenigge's career in Italy was mostly marred by injury problems. At the end of his contract in 1987, Rummenigge moved on to Swiss first division club Servette FC in Geneva, where he saw his career out. In his last season, he had his last success, becoming top scorer in the Swiss league with 24 goals. 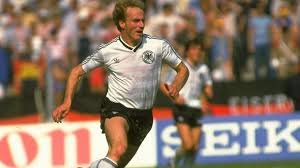 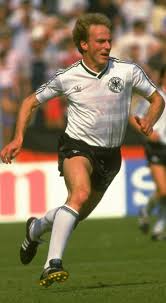 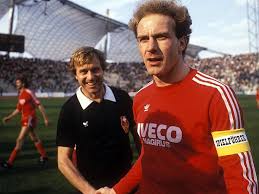 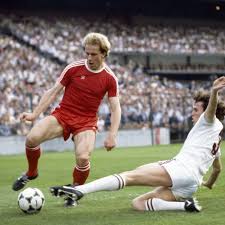