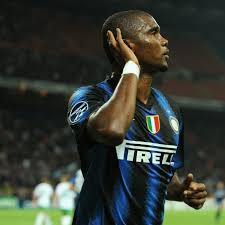 He is a Cameroonian retired professional footballer who played as a striker. In his prime, Eto'o was regarded by pundits as one of the best strikers in the world, and he is regarded as one of the greatest African players of all time, winning the African Player of the Year a record four times: in 2003, 2004, 2005, and 2010. A precocious talent, Eto'o moved to Real Madrid as a 16 year old. Due to competition in his position with more experienced players, he had several loan spells, before signing for Mallorca in 2000 where he scored 70 goals. His impressive form saw him join Barcelona in 2004 where he scored 130 goals in five seasons and also became the record holder for the most number of appearances by an African player in La Liga. Winning La Liga three times, he was a key member of the Barcelona attack, alongside Ronaldinho, that won the 2006 UEFA Champions League Final, with Eto'o scoring in the final, and was part of a front three of Lionel Messi and Thierry Henry that won the 2009 UEFA Champions League Final, with Eto'o again scoring in the final. He is the second player in history to score in two UEFA Champions League finals. At Barcelona, Eto'o came in third for the FIFA World Player of the Year in 2005 and was twice named in the FIFA FIFPro World XI, in 2005 and 2006. In 2010, he signed with Inter Milan, where he became the first player to win two European continental trebles following his back-to-back achievements with Barcelona and Inter. He is the fourth player in Champions League history, after Marcel Desailly, Paulo Sousa, and Gerard Piqué, to have won the trophy two years in a row with different teams. After brief spells with Anzhi Makhachkala, Chelsea, Everton, and Sampdoria, Eto'o found prolific form again in the Süper Lig with Antalyaspor having scored 44 goals in 76 league games. In 2015, he received the Golden Foot Award. As a member of the Cameroon national team, Eto'o was a part of the squad that won the Gold Medal at the 2000 Olympics. He also won the African Cup of Nations in 2000 and 2002. Eto'o has participated in four World Cups and six Africa Cup of Nations. He is the all-time leading scorer in the history of the Africa Cup of Nations, with 18 goals, and is Cameroon's all-time leading scorer and third most capped player, with 56 goals in 118 caps. Eto'o announced his retirement from international football in August 2014. 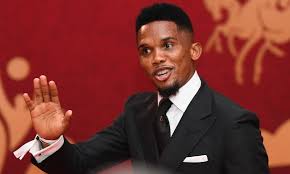 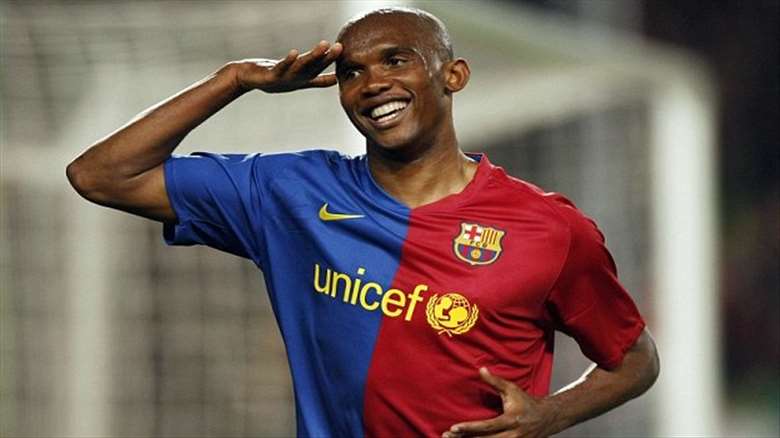 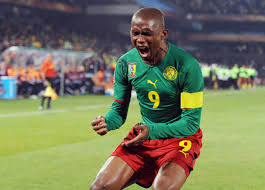 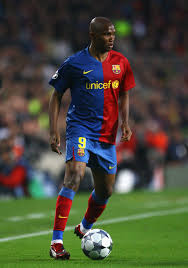