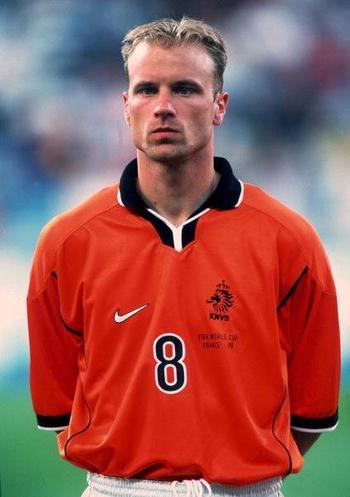 Dennis Nicolaas Maria Bergkamp (Dutch pronunciation: [ˈdɛnəs ˈbɛrxkɑmp] (About this soundlisten); born 10 May 1969) is a Dutch professional football manager and former player. Originally a wide midfielder, Bergkamp was moved to main striker and then to second striker, where he remained throughout his playing career. Nicknamed the "Non-Flying Dutchman" by Arsenal supporters due to his fear of flying, Bergkamp is widely regarded as one of the greatest players of his generation. The son of an electrician, Bergkamp was born in Amsterdam and played as an amateur in the lower leagues. He was spotted by Ajax at age 11 and made his professional debut in 1986. Prolific form led to an international call-up with the Netherlands a year later, attracting the attention of several European clubs. Bergkamp signed for Italian club Inter Milan in 1993, where he had two underwhelming seasons. After joining Arsenal in 1995, he rejuvenated his career, helping the club to win three Premier League titles, four FA Cup trophies, and reach the 2006 UEFA Champions League Final, which marked his last appearance as a player. Despite noting a desire to not go into coaching, Berkgamp served as an assistant at Ajax between 2011 and 2017. With the Netherlands national team, Bergkamp was selected for Euro 1992, where he impressed, scoring three goals as his country reached the semi-finals.[4] At the 1998 FIFA World Cup, he scored a memorable winning goal in the final minute of the quarterfinal against Argentina which has been regarded as one of the greatest FIFA World Cup goals.[5] Bergkamp surpassed Faas Wilkes's record to become the country's top scorer of all time in 1998, a record later eclipsed by Patrick Kluivert, Klaas-Jan Huntelaar, and Robin van Persie. Bergkamp has been described by Jan Mulder as having "the finest technique" of any Dutch international[6] and a "dream for a striker" by teammate Thierry Henry.[7] Bergkamp finished third twice in the FIFA World Player of the Year award and was selected by Pelé as one of the FIFA 100 greatest living players. In 2007, he was inducted into the English Football Hall of Fame, the first and only Dutch player ever to receive the honour. In 2017, Bergkamp's goal against Newcastle United in 2002 was voted as the best Premier League goal of all-time in the league's 25-year history.[8] 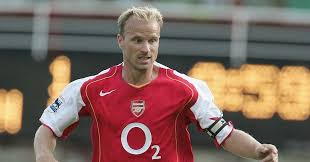 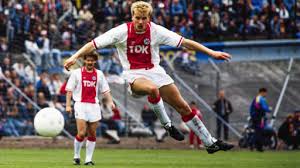